My last visit to Snowshill took place in February when the ground was covered in snow and all the snowdrops were in bloom.  The garden had been opened just for two days for humans to see the beautiful display of snowdrops, and the house, which is full of interesting things, wasn’t open.  My humans decided to visit again in summer, and I was jolly pleased to go along with them.  I was very hungry when we arrived so before exploring tucked into a tasty bowl of vegetable curry. 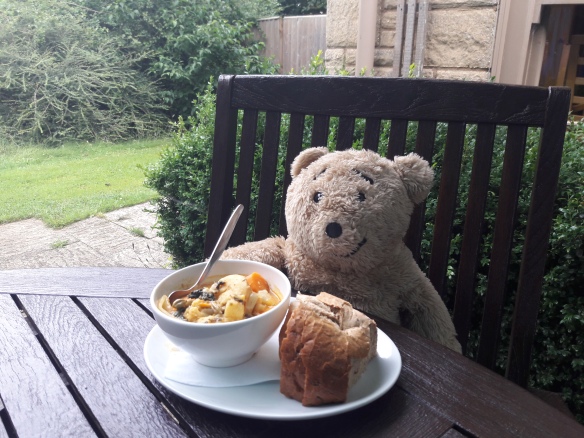 We then set off along the path to explore the estate and the manor house.  The house used to belong to Charles Wade, who started collecting things when he was seven years old.  In 1951 Mr Wade gave the house and its contents to the National Trust.  The first interesting item that I spotted was a windmill with lots of little wooden men that moved around as the sails turned.

The windmill is a replica of the original one which is kept inside to protect it from the weather.  The windmill was on a tall post, not on top of my head as in this photo!

Further along I was delighted to find a special area for bears, though the humans said it was for children really.

I spent a while exploring; the humans couldn’t see where I was until I popped up over the fence.

I was very pleased to find a little bear shelter in the woods too.

In the orchard I climbed up into one of the trees to get a closer look at the shiny red apples.

After walking up through the cottage gardens I clambered up onto a wall to have a look at all the doves sat on top of the dove cote.

I forgot to ‘mind my head’ in a couple of places but as my head is quite soft luckily it didn’t hurt much. 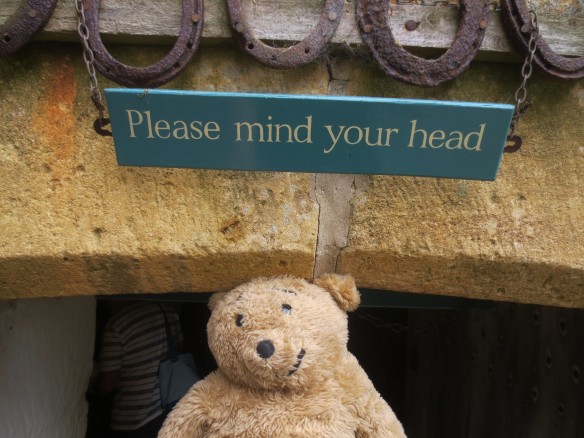 There was a bear sized typewriter of the sort that would have been used during the first world war.  I like being able to see the type hammers going up and down hitting the paper on old-fashioned typewriters.

Here I am outside the main Manor House.  Mr Wade didn’t live inside the Manor House, he had lived in a much smaller building in the garden called The Priest’s House.  Over 400 years ago the house and gardens were part of an Abbey. 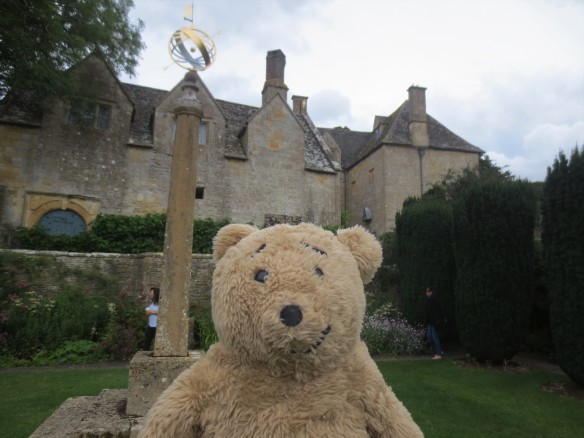 This is the bathroom in the Priest’s house.  The bath looked very deep; Mr Wade must have been able to sit in it with the water right up to his neck.

In this photo Mr Wade’s box bed is just behind me.

We went outside again and I had a little rest as my legs were starting to feel a bit tired.

The model village next the ‘harbour’ was full of tiny houses too small for bears.  They were replicas as the ones that Mr Wade made are kept inside nowadays to stop them being damaged by the weather.

When we went into the manor house I found the original houses stored high up on some shelves. 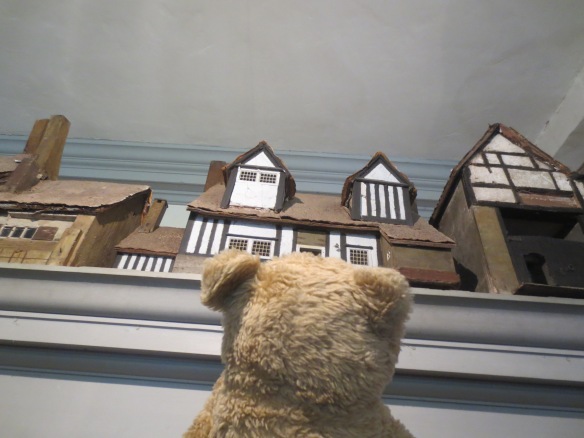 There were several trunks inside the house with very complex locking mechanisms. This one is over 400 years old.  I think it must have been very difficult to open without the key.

There weren’t any bears on display anywhere though I did find some other ancient animals and dolls locked up in a glass case.  They all looked a bit worried. 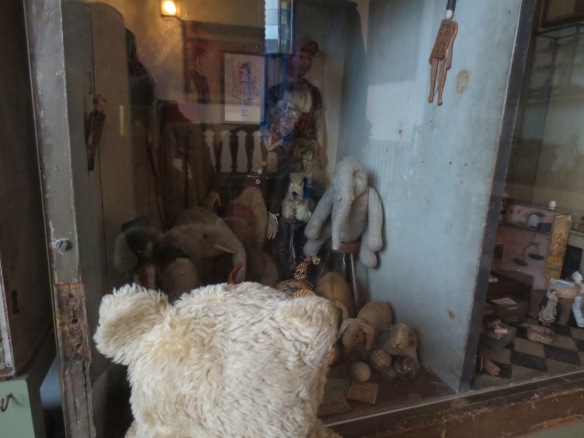 Upstairs we found an amazing display of very old bicycles.  I rather like this one, the seat looks just the right size for me.  Unfortunately as everything  is so very old I wasn’t able to try it out.

Here I am in front of a huge clock that was telling the wrong time! 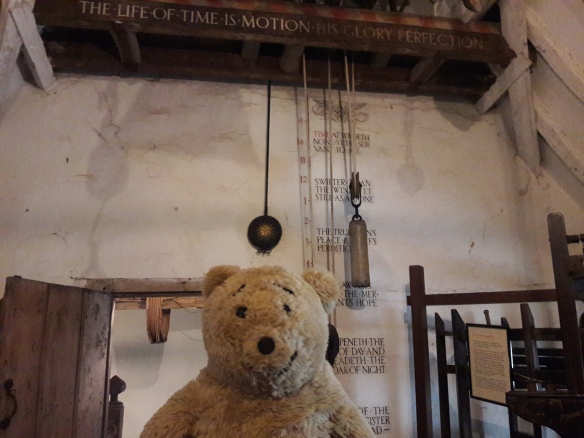 I don’t know whether Mr Wade was able to play any musical instruments but he certainly collected many.

I wondered whether all the buckets were there in case of fire or whether Mr Wade just liked buckets!

I tried to have a conversation with chap but I don’t think anyone was inside!

This is not a bear sized helmet!

After being inside the helmet I needed some fresh air so went outside to explore in the  kitchen garden.  The yellow courgettes were growing well.

There were some courgettes being sold on the produce table but my humans forgot to buy them; I think they got distracted by the lovely sweet peas in the bucket.

Sheep live in the field outside.  They had all recently been shorn and so were looking quite thin.

I’m not sure what this plant is, but the bees certainly like it.

Wandering back up to the entrance I managed to get caught up in a burdock plant.  The humans managed to free me;  then I carried a few seeds along with me a for while before brushing them off my fur. 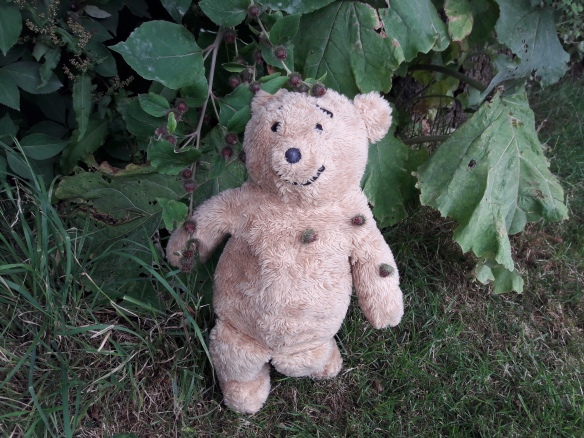 This was a good visit food wise.  Before leaving it was necessary to have afternoon tea.  Yum, yum, yum.

Snowshill is a very interesting place to visit for humans and bears (there are many fascinating objects in the house that I haven’t mentioned here).   Well worth visiting.

To see my post about Snowshill in the Snow see:

For more information about Snowshill see:

2 thoughts on “Snowshill in summer”