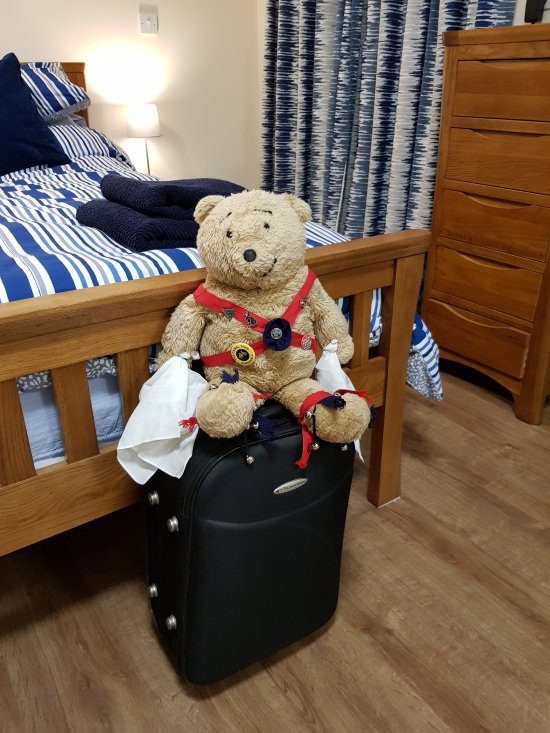 I borrowed a Morris dance hat while my favourite dancer called in to visit us. She is a woman which is a tad confusing as the group call themselves The Ancient Men. 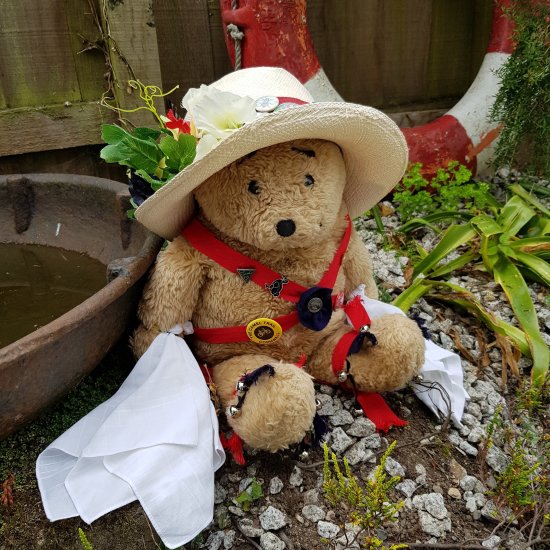 Outside The Seven Stars I was pleased to meet up with the full-time mascot Lobby (a friendly lobster). 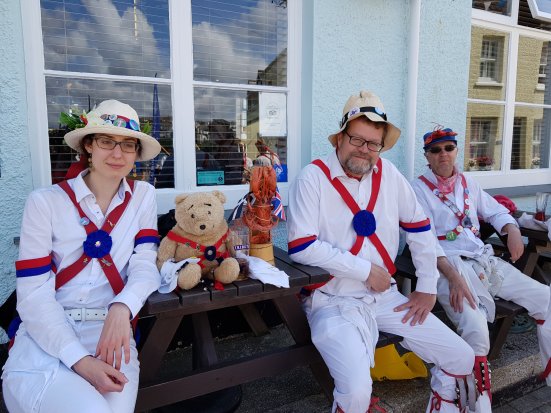 In order to get to Trellisick (where the dancers were performing later) it was necessary to first board a ferry to Falmouth. 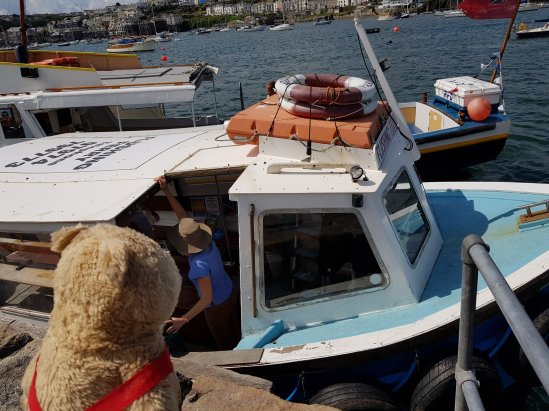 The Flushing to Falmouth ferry is called Miranda and there was plenty of room for a small bear. 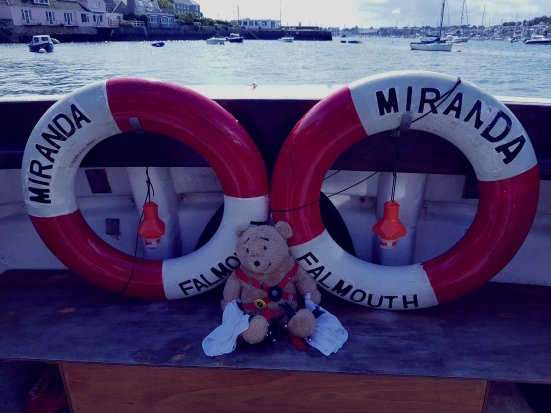 I waved to a few Ancient Men on the quayside. They had chartered a special boat just for them that was arriving later. 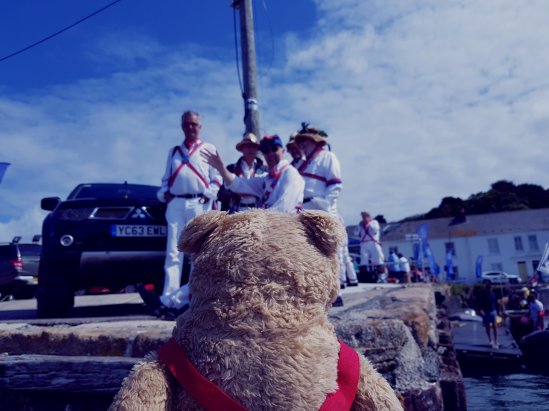 Most of the boats in the river Fal were not going anywhere. 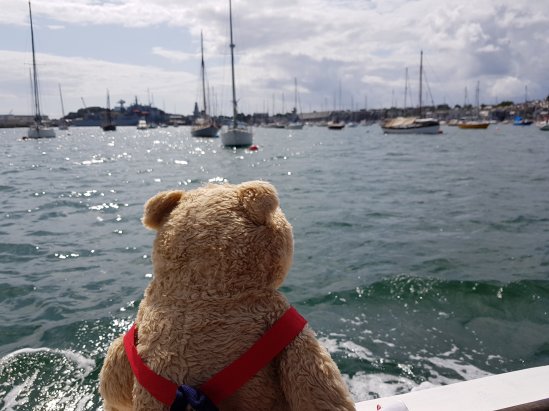 It was a tad windy on the quayside at Falmouth with a risk of getting blown into the sea so I climbed into the bear carrier while we waited for the next boat to take us to Trellisick. 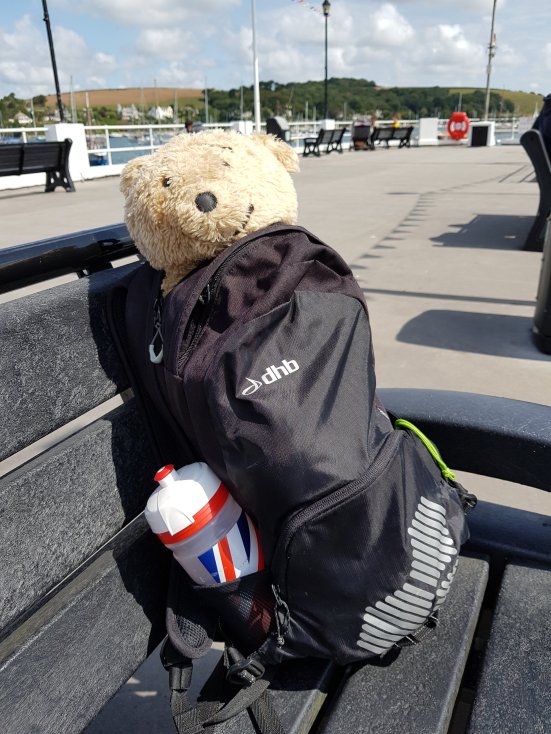 In the distance on the hill is Trellisick house and gardens that used to be owed by some very wealthy people. In 1955 they gave it all to The National Trust so now everyone can enjoy it. 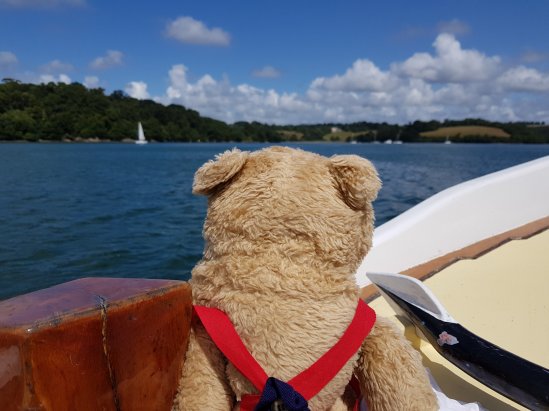 We set about exploring the gardens while waiting for the Morris dancers to arrive. 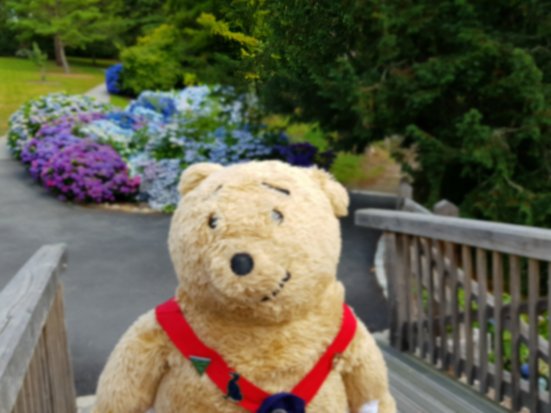 The hydrangeas were very different to those in the garden at home. Huge blue blooms nearly as big as me. 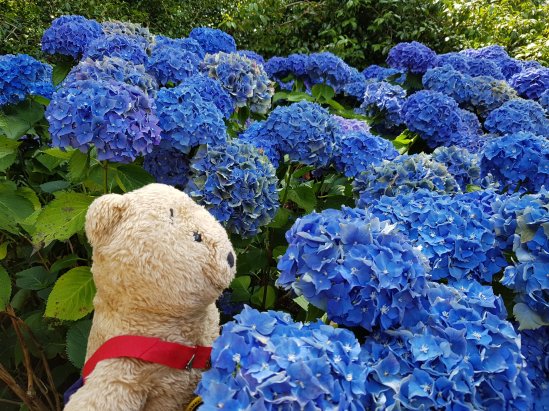 On the grass a bear-sized hurdling course had been set up. I had a go but wasn’t very quick. Being a little clumsy I nearly knocked one hurdle over.

Many stately homes owned by the National Trust have special small houses for bears. It was a delight to find one at Trelissick. 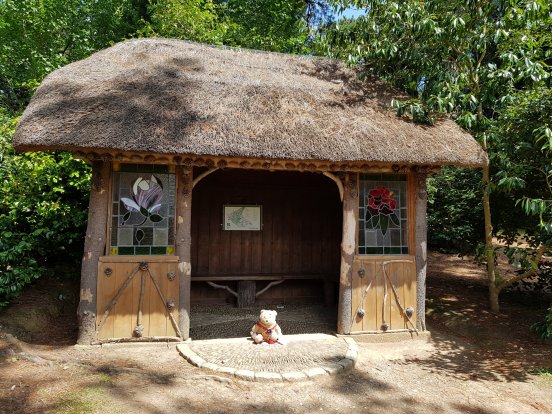 From the front of the house there is an amazing view of the Fal estuary. 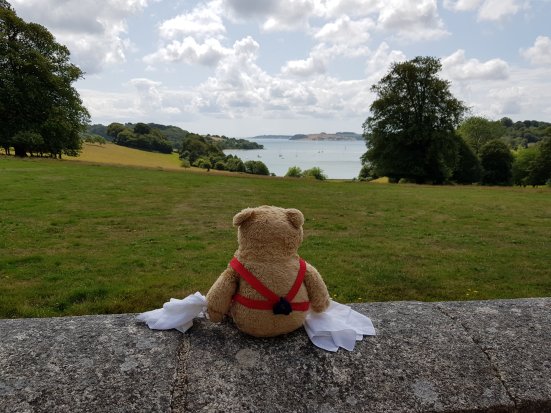 The sack race had been set up for young humans. I decided to have a go… 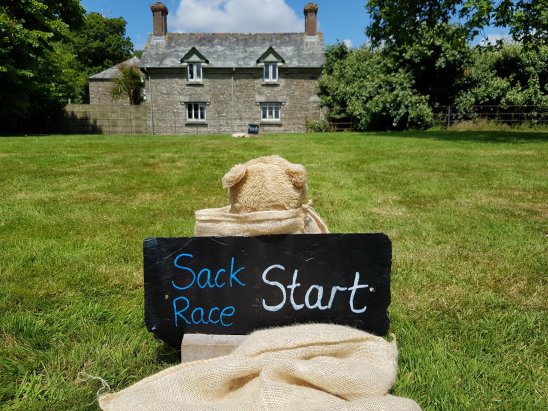 Phew; made it to the finish. A shame my human didn’t film me! 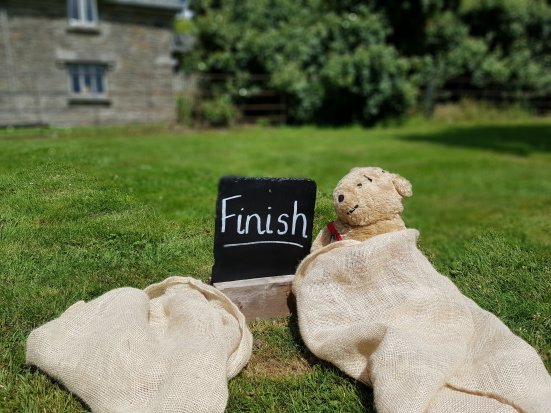 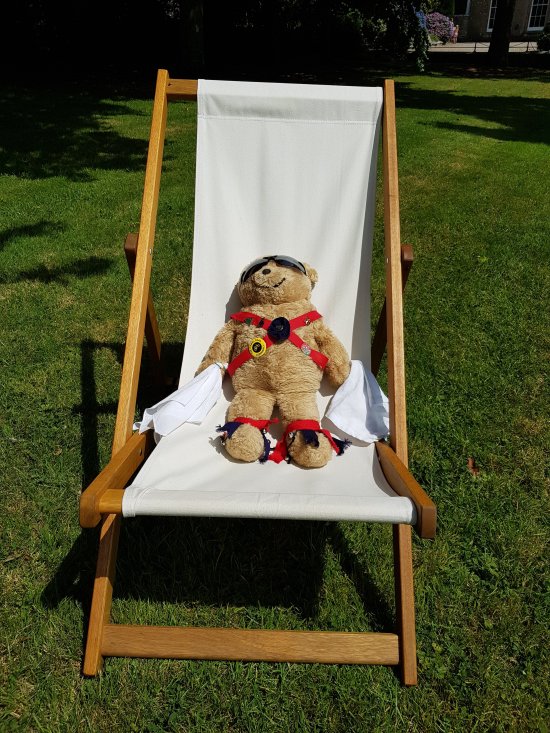 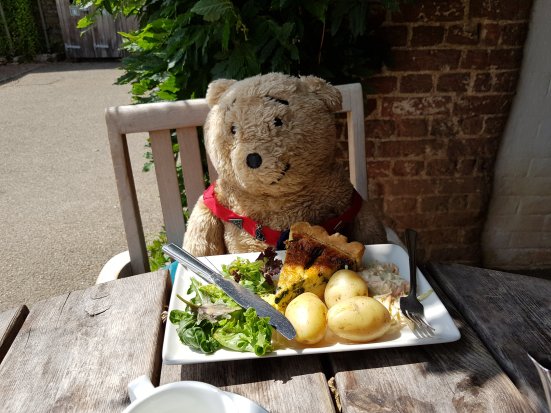 The sound of jingling bells meant that The Ancient Men had arrived. I found them next to the big house and found a good spot next to Lobby to support them 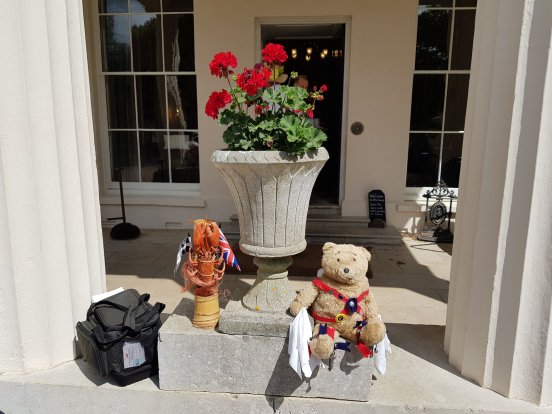 Some of The Ancient Men are women and they aren’t ancient. They first toured Cornwall 90 years ago and back then they were all men. All of the Ancient Men (and young women) attended Oxford university and every year they meet up for a tour. 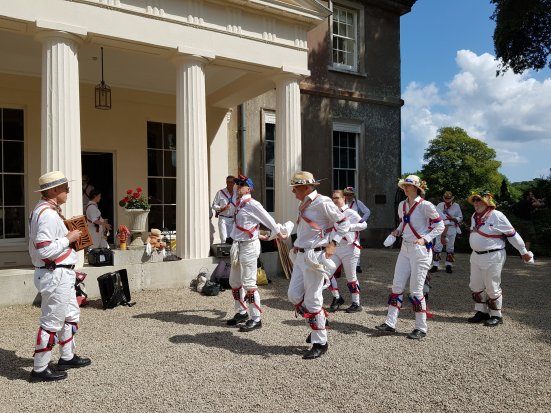 At the end of the dancing it was time for a cream tea. Unfortunately wasps also like cream teas. 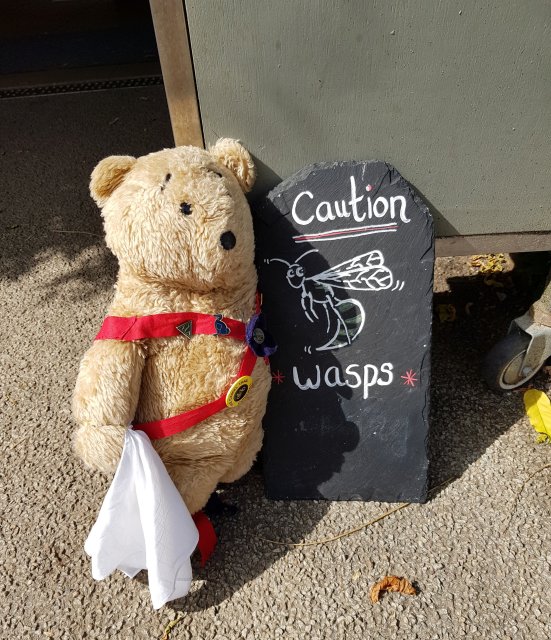 I ate my cream tea indoors as had no intention of sharing it with wasps. 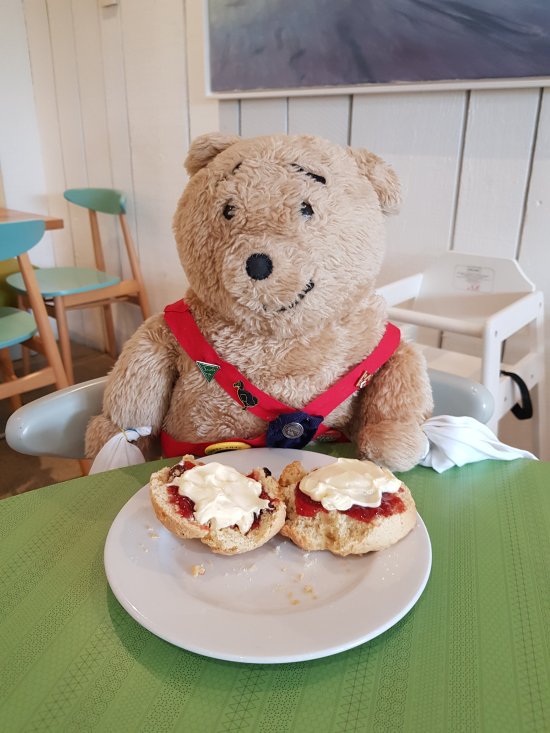 Time flies when you are having fun. It was soon time to walk back down to the shore to catch the boat back to Falmouth. I paused for a photo with a tree fern. They grow well in the gardens along the Fal estuary. 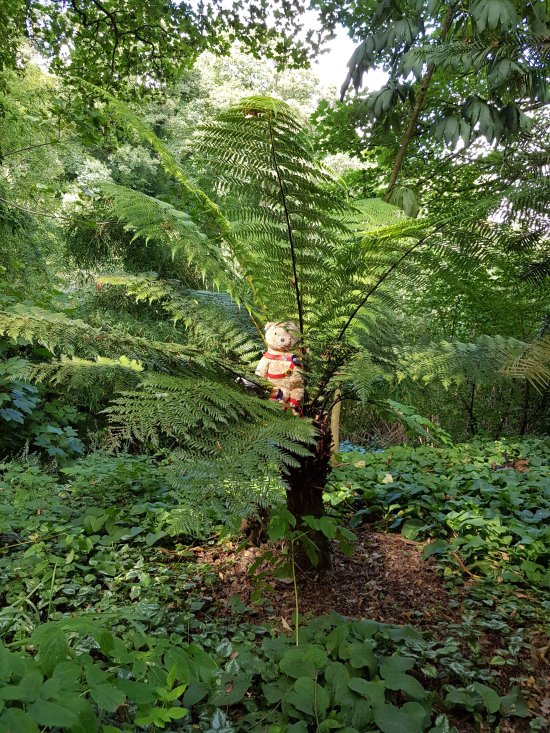 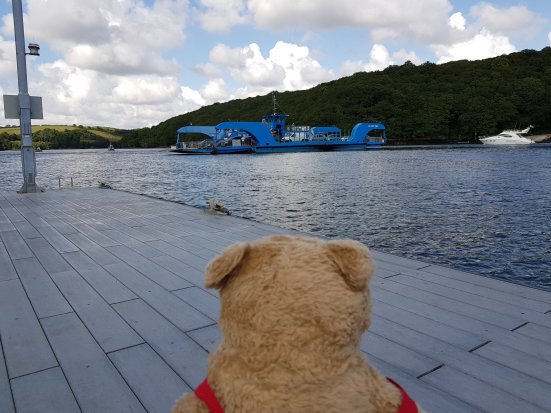 Once on board The Enterprise 3 the skipper asked me if I would like to steer the boat for a while. It was quite hard work for a small bear.

On arriving back in Flushing the regatta carnival was taking place. 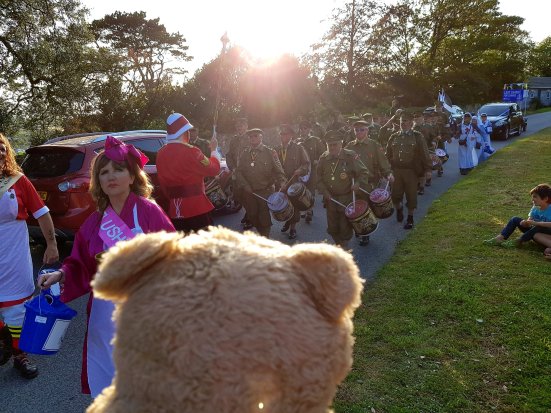 The Ancient Men(and young women) were in the procession and danced their way along the road. 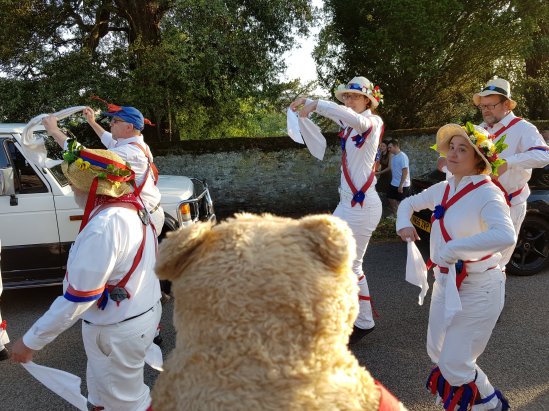 Later I joined the Ancient Men for a drink. I am hoping to acquire a tankard for the next time I meet up with them! 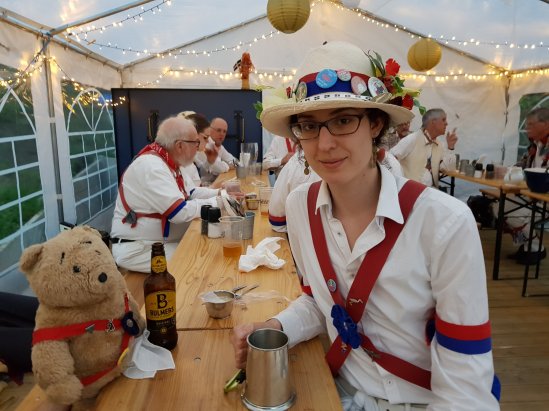 For more information about Trelissick https://www.nationaltrust.org.uk/trelissick