The entrance to the footpath to Glastonbury Tor is not designed for bears that like cake.

I just about managed to squeeze through.

Glastonbury Tor is a special place that many people visit for all sorts of reasons.

The climb up to the top can be quite challenging for some; it certainly is for bears with short legs. 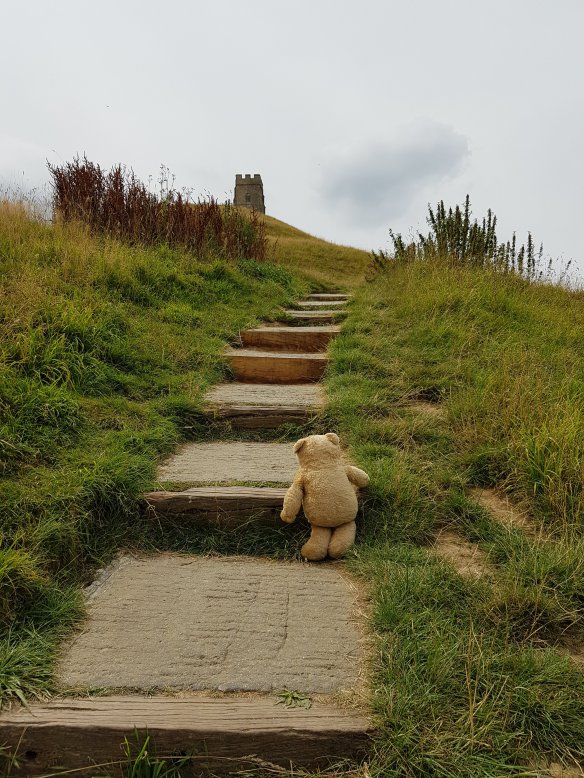 There were lots of people sat all around the top looking at the splendid view.

Here I am in front of the tower which is all that is left of a church that was built here in the 14th Century (St Michaels Church).

There are some stone seats inside the tower. It is OK to shelter from the wind, but the tower doesn’t have a roof, so not so good if raining.

Here I am emerging from the back of the tower. 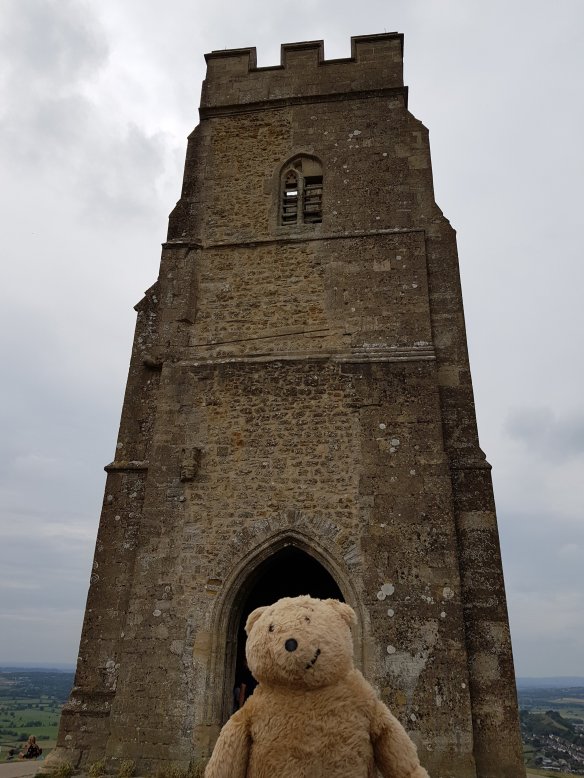 In the distance I could see the big stage in the grounds of Glastonbury Abbey, where the Extravaganza music festival was on later.

It seemed like a good place to eat my sausage roll that didn’t have any sausage in. 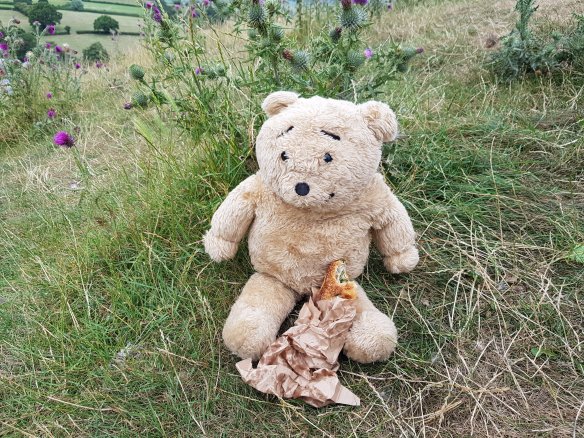 As we walked back down the other side of the Tor there were a group of people with a very tall fox holding some signs for a photograph. They were campaigning to stop foxes getting hunted on National Trust land. I am glad I am not a fox. 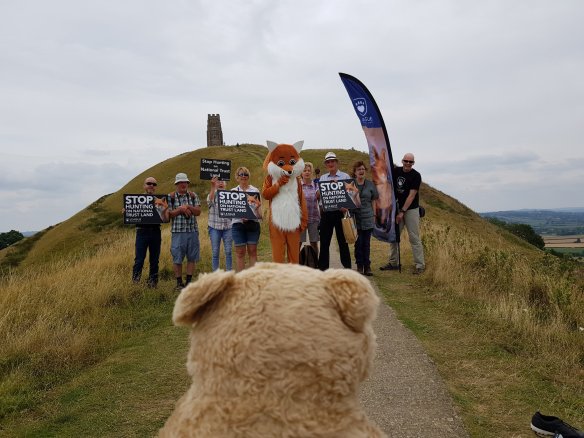 Outside The Abbey grounds there was a big sign stating that all the tickets were sold out for the Extravaganza. I hoped that my humans had remembered to get a ticket for me. 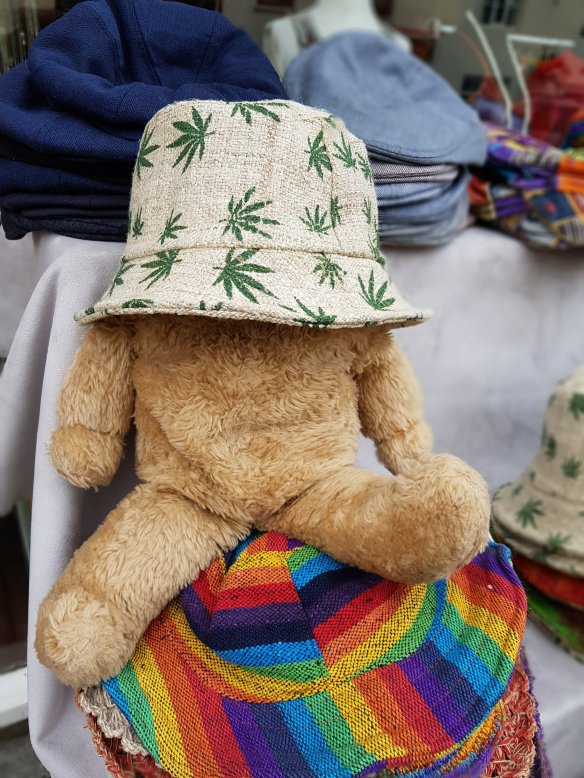 At the entrance to The Abbey we joined the queue. The humans did indeed have a ticket for me. 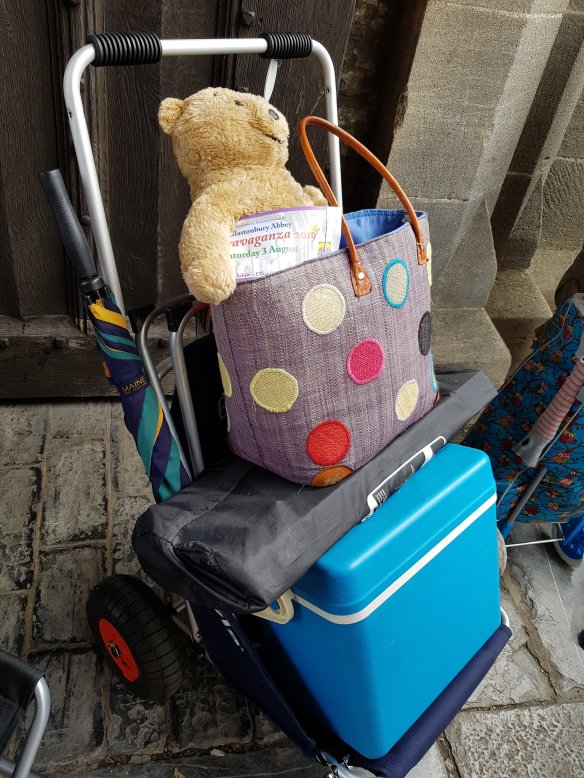 There were quite a few people queuing in front of us but they had all ‘made themselves at home’ and were sat on chairs drinking and eating.

Time to eat the Eccles cake bought in the High Street earlier…. 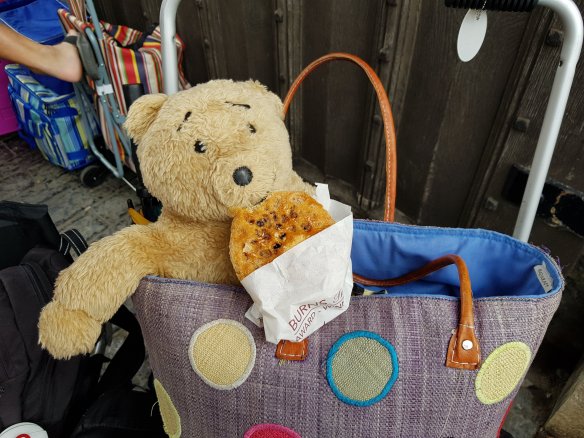 All of a sudden everyone started to pack up their chairs; the gates were open and it was time to go into The Abbey grounds. I had quite a good ride on the trolley!

We settled ourselves down just in front of the sound engineer’s tent where there was a good view of the stage.

I was jolly pleased to meet Michael Eavis, who is the organiser of Glastonbury Extravaganza, and also has been hosting the very popular Glastonbury festival at his nearby farm at Pilton since 1971. 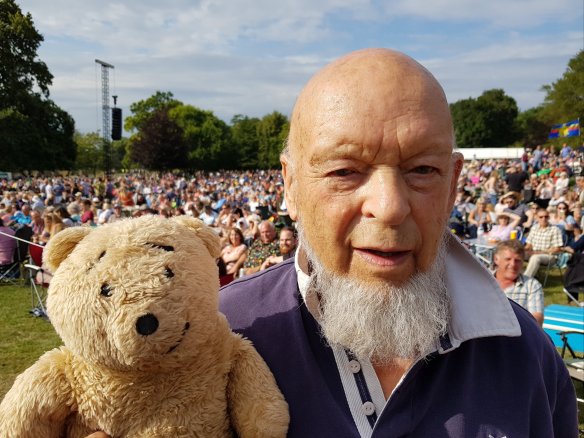 I managed to get right to the front to see The Lighthouse Family. They were very good but the base notes from the drum were a little harsh for my small ears, so retreated a bit further away from the big speakers after a few minutes at the front.

There was time for a healthy snack before the next act.

I didn’t get so close to the stage for The Specials. I enjoyed seeing myself on the big screen when the camera scanned the crowd! 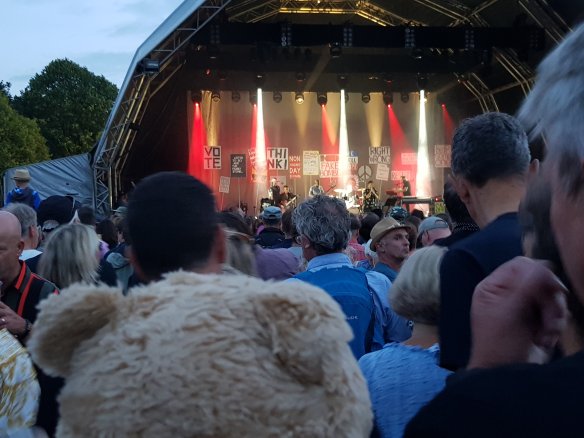 Lots of humans were taking selfies of themselves with the band behind. Here is one of me…

The Specials played until it got dark, then minutes after they had finished playing their encore the firework display started. It was a fantastic display but I did find some of the bangs a bit loud.

After all the fireworks had finished it was time to go home. I nearly dozed off on the trolley but was pleased the humans woke me up to see the flood lit abbey ruins.

Glastonbury is an interesting place to visit, and if you like music, the Extravaganza that takes place annually in the abbey grounds is well worth attending. I certainly had a lovely day out.